This post was a long time coming. I knew I wanted to try this sizing experiment for more than a year; and over the last 6 months or so, I’ve been trying to work on it in between all my other work and personal projects.

(Warning: this post involves lots of words and math.)

I talked about sewing pattern sizes vs. ready-to-wear size numbers and vanity sizing a couple years back in this post (but that was probably before many of my current readers found my blog).

I’m sure you’ve heard people say that the standard measurements used in the clothing industry have shifted over the decades. But they really haven’t changed as much as people think. The only thing that has really changed is the size number on the label – known commonly as “vanity sizing”. The standard body measurements have barely changed from year to year.

Here’s a section of a spreadsheet of my vintage patterns showing sizing for a 34-inch bust. Notice that the biggest change from year to year is the size number not the measurements used:

Years in italics indicate decade when exact year is unknown.

You’ll see that in the 1940s and ‘50s, a 34-inch bust was considered a size 16 in sewing patterns. In the late 1950s and through the 1960s, that same bust size became a size 14 with a slightly smaller waist and hips. Then in the 1970s, the 34-inch bust became a size 12 while the waist and hips went up a little in proportion – proof that there is a bit of psychological vanity sizing in sewing patterns, but not as drastic as it is in the ready-to-wear industry.

Most patterns are drafted in a mid-range size and then graded down for the smaller sizes and graded up for the larger sizes. This method involves some math and a whole bunch of measuring. (Threads Magazine provides a good explanation of grading here and a quick-guide chart here.)

Now, on to my experiment.

I admit I’m lazy when it comes to grading patterns. The math isn’t complicated, but all that measuring is a lot of work.

I started using my cheater’s method years ago when I needed to increase the size of flower-girl dresses for little girls who were larger than a standard pattern but proportionally still the shape of a standard girls’ pattern. (Part of the reason I started doing this stemmed from last minute clients who didn’t give me the time to do much patterning.)

I compared the differences on the pattern’s standard measurement charts and used ratio computations to find the percentage of the needed size increase. Then I just copied the pattern at the larger percentage on my home printer.

This enlarging method also helped me make a quick bodice pattern for a cousin in my sister’s wedding, who was really tall for her age but still not shaped like a woman yet. So far, this method for enlarging a kid’s pattern has worked for me every time with very few (if any) alterations needed.

When I wanted to sew a vintage pattern for myself but only had it in a size that was 2 or 3 sizes too big, I used my ratio method to shrink it to my size on the copier.

I did this for myself for a few years, getting a nearly perfect fit every time I shrank a pattern. For a long time, I thought vintage patterns were just drafted better, or differently.

But then I discovered that a vintage pattern in my actual size had as many fit issues as most modern sewing patterns. And I began to reexamine why shrinking by a percentage seemed to work better for me.

I think it’s because I am proportionally smaller than the average size used to draft most patterns. (I am small but not petite by clothing standards.) I don’t need merely a few areas changed, or some areas changed more than others (like when grading). I need everything equally shrunken down.

I had decided to test my theory by doing a real comparison of a vintage pattern that I owned in both a bust size 34 and a bust size 31 (my actual size).

I chose the Simplicity 7136 pattern from 1967 for a couple of reasons – I had it in two sizes and it had very basic style-lines, making it easier to compare small differences.

NOTE: Most vintage patterns have actual stitch lines printed on the pattern pieces. If you are using a pattern without marked seam allowance, you will need to either cut off the seams allowance before copying or make a line to measure what the new copied seam allowance ends up being. You will want to sew on the actual copied stitch lines, so adjustments to seam allowance may be required. 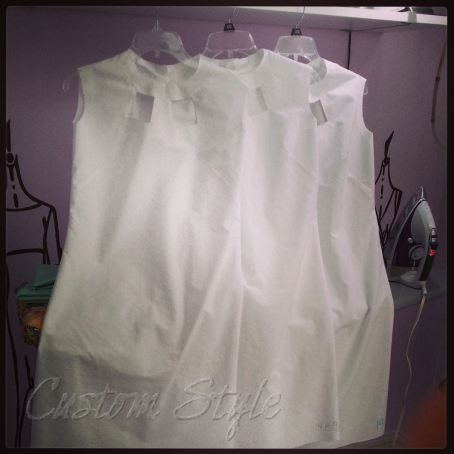 Here’s the math I used with the bust measurements printed on the pattern envelope to determine the scale factor:

My theory was that I could also apply this percentage to both of the larger waist and hip measurements to obtain the corresponding chart values:

I’m obviously rounding to the nearest whole number because that’s the precision on the pattern envelope.  And look!  It’s pretty darn close.  Here is how my exact ratio computations compared to Simplicity’s size chart:

I’m a size WHAT?? Let the Mind Games begin…

Misconception: If I wear a size 10 store-bought dress, I need to buy a size 10 sewing pattern.

But seriously, this is the 21st century, and women’s clothing-makers have since resorted to a type of “psychological” sizing.  (You may have already sensed this was the case.)  Let’s look at this simple example:

Brand A sells the same type of garment as Brand B.  They may even be in the same price range.

But to compete with Brand A, Brand B starts labeling its clothes with smaller numbers, all while keeping its prices roughly the same as Brand A’s.  So a Size 10 at Store A becomes a Size 6 at Store B.

Now B’s size 6 is selling better than Brand A’s 10 because, after all, what woman wouldn’t rather (claim to) be a 6?

The result:  “big designer” clothing labels often have smaller size numbers – and higher prices – than the mid-priced department stores.  And consumers buy into all of it!  Seems the clothing industry changes the size systems as often as the women change their clothes, doesn’t it?

(By the way, you also may have noticed men’s clothing isn’t as grossly affected by these mind games, partially because of the way men shop, but also because men’s clothing has traditionally been labeled by actual measurements anyway.)

Luckily, sewing patterns are different.  Their size systems don’t change as often as retail clothing’s do.  Pattern sizing was first standardized in the 1940s, but those standards were not universally accepted until the 1960s.

Thus, sewing patterns you find in the fabric store today are most likely using the same system in place since Kennedy was president, and the size numbers have not changed either.

Rule of thumb:  It is best to take your current body measurements before buying a pattern because it is common for your pattern size to go up as much as 6 numbers from your store-bought size.

Let’s look at another example:  a woman shopping at the mall buys clothes in the 0-4 range for Womens and 1-3 range for Juniors, her size shifting slightly depending on whether she’s at Banana Republic, Old Navy, or Delia’s.  (Check out those links to see what I mean.)  But according to her measurements, her pattern size at a store like JoAnn Fabrics winds up being a Womens 6 and a Juniors size 7 or 8.

To top it all off, any given sewing pattern may even need to go up or down by a size, after the pattern style & included amount of ease (or “breathing room”) are taken into consideration.

I have sewn for multiple women who have given me a pattern they’ve purchased, believing it to be their size.  In most cases, they’d chosen something way too small, and then I’ve had to discretely buy them the correct size so they wouldn’t freak out.  Seriously.

So remember:  whether you’re shopping “off-the-rack” or looking for a sewing pattern, don’t become obsessed with a size “number” – no one will think about your garment’s numeric size, as long as what you are wearing fits correctly on you.  (And besides, custom-made clothing won’t even have a size label for anyone to check!) 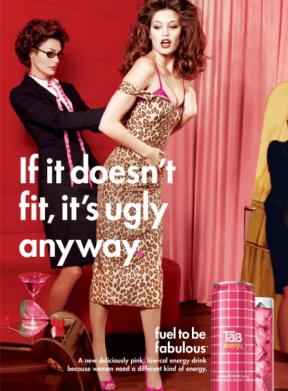